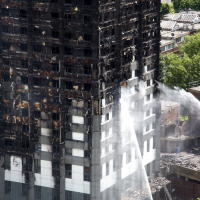 A universal shift in culture is needed to help people live in high rise tower blocks in the UK believe they are safe as current building and fire regulations are not fit for purpose, according to a new report.

The interim report into the independent review of building regulations and fire safety set up by the Department of Communities and Local Government (DCLG) after the deadly Grenfell Tower fire in London says that then whole system allows those who want to take short cuts to do so.

Chair Dame Judith Hackitt is calling on the construction industry, building owners, regulators and the Government to address the shortcomings as quickly as possible.

She says in her interim report that a culture change is required with industry taking greater responsibility for what is built and this needs to be started immediately and there should be a clear, quick and effective route for residents to raise concerns and be listened to.

‘I have found that the regulatory system for safely designing, constructing and managing buildings is not fit for purpose. The current system is highly complex and there is confusion about the roles and responsibilities at each stage. In many areas there is a lack of competence and accreditation,’ she says.

‘While this does not mean all buildings are unsafe, it does mean we need to build a more effective system for the future. That is why I am today calling for the construction industry, building owners, regulators and Government to come together to identify how to overcome these shortcomings together,’ she adds.

The interim report sets out several broad areas for change including ensuring that regulation and guidance is risk-based, proportionate and unambiguous, clarification of roles and responsibilities for ensuring that buildings are safe and improving levels of competence within the industry.

It also says that there needs to be improvement in the process, compliance and enforcement of regulations, the creation of an effective route for residents’ voices to be heard and listened to and improved testing, marketing and quality assurance of products used in construction.

Dame Judith consulted widely in developing her interim report and will continue to do so in the coming months before making her final recommendations.

‘I have been deeply affected by the residents of high rise buildings I have met and I have learned so much from them. These buildings are their homes and their communities. They are proud of where they live, but their trust in the system has been badly shaken by events of the last few months. We need to rebuild that trust,’ she explained.

The independent review will now undertake its second phase of work including targeted work in partnership with the sector and other stakeholders. A summit involving government and representatives from the building industry will take place in the New Year and a final report will be published in the spring of 2018.