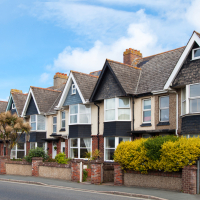 The true extent of the damage wrought by the financial crisis on the UK’s property market is revealed in a new analysis which shows that 28 town and cities have seen a lost decade of house price growth.

Belfast, Hartlepool and Blackpool have been most affected over the last 10 years, according to the analysis of Land Registry figures by house building platform Homegrown, while properties in London, the South East and the South West least affected.

A stark North-South divide means homes in the North East are still 5.6% down on what they were a decade ago while the North West is struggling with growth of just 5.5% over the decade.

‘This is two speed Britain in action. It’s now clear that great swathes of the UK have suffered terribly in the aftermath of the financial crash while areas in high demand have shrugged it off and surged ahead,’ said Anthony Rushworth, founder of housebuilding Homegrown.

‘We are too reliant as a country on a small number of densely populated areas, particularly in London and the South East. The technology exists to take a much more balanced approach to where Britons live and work. The Northern Powerhouse promised exactly that, but it will take more than a marketing campaign to really shift the balance and create a more stable property market for future generations,’ he added.