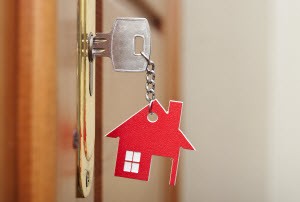 The government is promising a new emphasis on people who rent their homes when it unveils its housing strategy for England this week.

Housing Minister Gavin Barwell said there would be minimum tenancies and more homes built for rent in a "change of tone" from previous Tory policy.

He said the government had not given up making home ownership available to all.

Speaking on the BBC's Sunday Politics, Housing Minister Gavin Barwell said a package of measures would be in the White Paper due to be published on Tuesday.

These will aim to encourage more investment in building homes for affordable rent, which he defined as at least 20% below the market rate, with councils encouraged to get more involved.

Ministers have previously announced letting agents in England will be banned from charging fees to tenants.

The last Conservative general election manifesto said "everyone who works hard should be able to own a home of their own", and Mr Barwell said the government was still committed to reversing the decline in home ownership.

But he said the government also had to have "something to say" to renters who were facing unaffordable costs.

There are an estimated 4.3 million tenants in the private rental market.

"Whether you're trying to buy or you're trying to rent, housing in this country has become less and less affordable because for 30 or 40 years governments have not built enough homes and this White Paper is fundamentally trying to do something about that," Mr Barwell said.

The focus on rentable homes was welcomed by Rico Wojtulewicz of the House Builders' Association, which represents small and medium-sized house builders.

Mr Wojtulewicz said that if small and medium enterprises were better enabled to build, "you get the right type of homes in the right areas".

He told the BBC: "Concentrating too much on volume house-building, as we've seen in the last decade, is problematic - not just for supply, but the type of supply."

Rob Warm from the National Housing Federation said many people in the rented sector are receiving a "very poor" and "insecure service".