Today in politics: Eviction ban and UK rents up 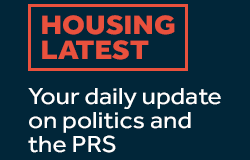 Labour wants the eviction ban extended and new figures from the ONS show rents across the UK were up by 1.4% to July this year.

The Shadow Housing Secretary, Thangam Debbonaire MP, has written to the HCLG Secretary, Robert Jenrick MP, ahead of the ban on evictions being lifted this weekend  https://labourlist.org/2020/08/labour-calls-for-extension-of-evictions-ban-as-250000-face-eviction/

In the letter, she says: “Labour has consistently argued that the ban should not be lifted until the government has introduced changes to our broken housing system that will protect tenants.”

The letter goes on to ask:

She concludes: “After the incompetent handling of the exams fiasco, the government must act now to avoid more chaos of its own making. The situation is urgent, but there is still time for you to rethink, and extend the ban. I urge you to do so.”

The Office for National Statistics has published the latest Index of Private Housing Rental Prices https://www.ons.gov.uk/economy/inflationandpriceindices/bulletins/indexofprivatehousingrentalprices/july2020