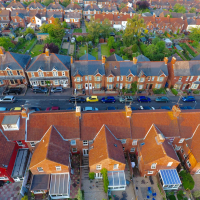 House prices are set to slip by around 1% across the UK over the next 12 months, with Greater London, the South East and East of England driving down the national figure, says the latest forecast.

And the outlook report from Home.co.uk suggest that the background drivers of the slowing housing market is not so much Brexit as the decision by the Bank of England to reduce interest rates to an historic low in 2009.

The latest asking price figures compiled by Home.co.uk already show that in the 12 months to December this year, prices fell in London by 2.5% and they are likely to fall by 3.5% by the end of 2019.

It predicts that sentiment in the capital will worsen and home buyers will continue with a wait and see approach while the value of London homes slide further.

Those renting a home in London are likely to see a dramatic shortage of available rental properties causing rents to soar further. They have already climbed 6.3% in 2018, driven by scarcity while over the last two years, supply of rented accommodation has plunged by 34%.

Meanwhile, the South West, while prices have increased modestly by 0.7% in 2018, the firm predicts that the region’s property market could see a price fall of 1% over the course of 2019.

Some of this year’s most successful regional property markets are also set for a change with prices falling. For example, in the West Midlands prices have increased by 5.2% in the 12 months to December 2018 but are set to rise by a far lower rate of just 2% next year. And in the East Midlands, annual price growth of 3.6% could turn into a flat market in 2019.

By contrast, Home.co.uk anticipates only a small drop-off in house price growth in the North West and Yorkshire. The North West saw house prices rise 4.8% this year and prices in Yorkshire rose by 4.7%. Both should still see growth of 4% next year.

Annual growth of 7.4% this year in Wales looks set to continue. Five years ago the property market was stagnating due to oversupply but looking ahead prices are forecast to rise by another 7% next year.

However, the prospects for Scotland’s property market look less favourable. While prices have risen by 2.2% during 2018, the increase next year is set to be a more modest figure of around 1.5%.

Stagnation in the North East is set to continue during 2019. Prices stalled with just a 0.6% rise in the 12 months to December 2018. Next year prices are unlikely to lift much above 1%.

‘Looking ahead to 2019, our trend indicators suggest that national price growth will likely be in the red by 1% towards the end of next year. We don’t expect London prices to rise until 2020 and other regions look set to turn negative in 2019,’ said Home.co.uk director Doug Shephard.

He believes that Brexit is not to blame and while the current political uncertainty is not helping, it is the reduction of interest rates to an historic low level in 2009 by the Bank of England in 2009 that set the stage for the current sluggish housing market.

‘Going forward, the major challenge for estate agents will be to manage the expectations of vendors in the growing number of regions where prices are sliding. Failing that, property auctions look well placed to profit from the increasing numbers of frustrated sellers in and around London,’ he added.